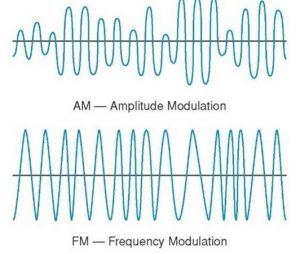 FM radio was born in 1928 out of research and development as a way to successfully improve AM radio by eliminating static. With an entirely new approach to transmitting radio signals, the late Major Edwin Armstrong invented a method of producing high fidelity sound using Frequency Modulation “FM”.  (One of several key inventions this little known inventor gave to our society namely, “Wireless Receiving System”, “Electric Wave Transmission”, “Antenna with Distributed Positive Resistance”, “Method of Receiving High Frequency Oscillation”, “Selectively Opposing Impedance to Received Electrical Oscillations”, “Signaling System”,   “Wireless Receiving System for Continuous Wave”, “Radio Signaling System”)  Unfortunately this superior technology was not embraced by the communication industry largely because of corporate greed.  Many established broadcasters felt FM was a threat and did what they could to dismiss or delay its public acceptance.  Mr. Armstrong was forced to use his own money to build the first commercial FM Radio station, W2XMN and later KE2XCC, in 1937 in Alpine, NJ.  http://www.cscmgt.net/history.php  The effects of the Great Depression and start of World War II also diverted resources from the development process.

Various household appliances often caused static interference to AM radio.  AM radio also experienced interference at night and had a limited audio quality.   By the mid-1940s many radio stations were simulating AM and FM versions of their stations, as many radio owners didn’t want the hassle of buying a high fidelity radio after recently purchasing a new AM radio. The FCC would take away rights for stations to simulcast many years later.  In terms of FM radio becoming a preferred standard; it would be approximately 50 years before the number of FM stations would overtake commercial AM radio stations in the year 1990.

Today FM still stands as the favored commercial radio source. FM Radio continues to progress in its metamorphosis as we watch the advent of the FCC’s remanding policies and the conversion to a digital world.